Weber earned a degree of Master of Science in mathematics from the Moscow State University in 1971. Eight years later at the Hebrew University in Jerusalem, Israel, he became a Doctor of Philosophy in mathematical economics. He is a professor in economics, since 1993 affiliated with the Southern Methodist University (SMU) in Dallas, Texas, U.S. and has Canadian and American citizenships.

More than a hundred articles by Shlomo Weber have been published in scientific journals on economics and on political sciences. His main research interests are diversity, game theory and political economy, though also public economics and economy of the former USSR, of Eastern Europe and Central Asia have been noted. 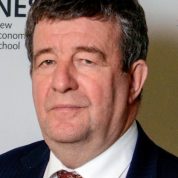