What makes a biologist? How many years do I have to study to call myself a biologist? What does it mean to study biology within multiple educational paradigms in the SAS?

We asked SAS Professor Ayla Arslan, a molecular neuroscientist with teaching and research experience in Bosnia and Herzegovina, Germany, Turkey, and the United States, to answer these and other questions.

Read the story about how Ayla came to her field of research and why she decided to move to Tyumen in the interview below.

We thank Professor Ayla Arslan for the photos from her personal archive.

1. How long does it take to study to be in the right to say "I'm a biologist"?

A biologist may refer to different things depending on the context. For example a biological scientist (biologist) is usually a person who has a PhD. A PhD is a research degree representing the ability to do independent scientific research in a specific field. For this, one needs at least about 10 years of formal education after high school. Interestingly, progress in biological sciences has fueled the progress in modern biotechnology. It was suggested that the global biotechnology industry market size had a value of USD 752.88 billion in 2020 and is expected to expand at a compound annual growth rate (CAGR) of 15.83% until 2028. So, the industrial opportunities have become diverse and this requires employees with various skills not only knowledge in biology or life science. In this context, somebody who works in the biotechnology industry may be called a biologist who has a bachelor's degree. This will require an education for about 4-5 years.

2. How does a biologist view the world? Are there any distinctive optics?

We are a part of a whole, originated from a common ancestor, and connected with each other by invisible wires and thus we are all dependent on and responsible for each other. Although invisible, "the wires" are real and represented by the continuous energy flow between the sun and the entire ecosystem. Of course, there are also other laws of nature which make these relations more intense. This kind of awareness should bring some more wisdom to biologists but even biologists forget these facts during the everyday struggle of life and do weird things I guess…

3. Why should a biologist be multidisciplinary? Why do biologists need to know philosophy or art history?

Biological sciences are booming and becoming ready to shake other areas. But this requires biologists to be able to understand the problems of other areas.

4. What are 5 most important topics in biology now?

All of the techniques above are related to molecular biology, and their specific applications into different living systems facilitate the progress. For example, optogenetics (Figure 1) is a research strategy combining genetic engineering and optics to manipulate the cells.

By this way, specific neuronal ensembles can be identified which will aid the development of rapid acting antidepressants (RAADs). At present it takes 3 to 4 weeks for an antidepressant to show its effect, but I am very hopeful that soon this may change as the current research for this challenging goal for the RAADs is very ambitious. 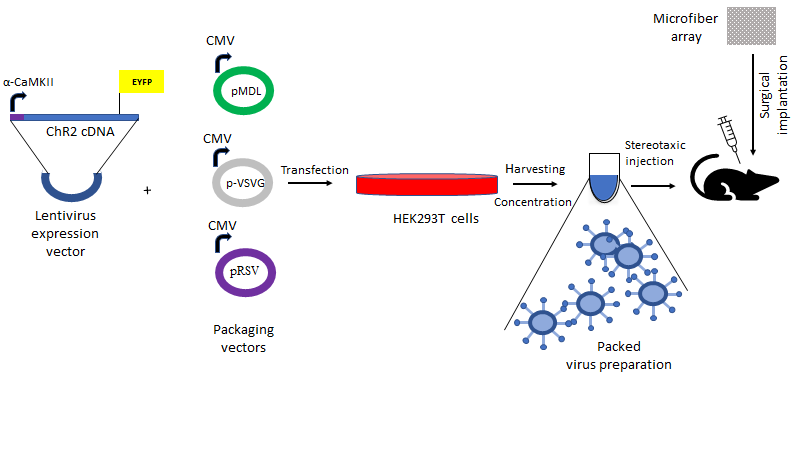 Figure 1. Basic workflow of optogenetic experimental set up. As an example, in the backbone of the lentivirus vector, C terminally fluorescent protein (EYFP) tagged Channelrhodopsin-2 (ChR2) in the presence of glutamatergic neuron specific promoter α-CaMKII is shown as a viral construct. This construct is transfected together with other vectors (packaging vectors) into the host cell (HEK293T cell) to induce virus packaging. Viruses are then introduced to selected brain regions by stereotaxic injection, which is followed by a surgical implantation of a microfiber device into the animal brain under anesthesia. Figure not to scale. Source: Ayla Arslan et al (2021) Optogenetic animal models of depression: from mouse to man. Yong-Ku Kim (Eds): Translational Research Methods for Major Depressive Disorder, Neuromethods, Springer (In press).

5. In what field of biology can we expect a breakthrough?

The field of molecular biology has been a major source of breakthroughs for decades and this trend will continue. But, molecular biology is such a diverse field by means of its focus ranging from neuroscience to cancer research so sometimes its impact might be hidden by the complexity and variations of its applications as well as its interdisciplinary methodologies. On the other hand, a brief examination of Nobel Prize trends shows that since the 2000's, a significant portion of the Nobel Prizes both in the field of Physiology & Medicine and Chemistry have gone to the topics of molecular biology. This is not surprising when considering the fact that molecular biology has continuously revolutionized medicine, science, and since the 1970s it has catalyzed the birth of the modern biotechnology industry to "fuel, heal and feed the world".

6. How is SAS different from traditional Biology departments?

There is an emphasis on interdisciplinarity. Also the students are not bombarded by massive biological knowledge. Instead, students are allowed to acquire sets of skills as a result of their learning experiences in different fields in addition to an emphasis on life sciences (or biology). Thus, the students have more opportunities in professional life. The industries associated with life sciences are not only about laboratory positions. There are clusters of sectors that require people who have a good knowledge of life sciences but also some other professional soft skills, which are usually ignored in typical biology programs. Thus, in today's changing landscape of the job market our students can better position and adjust themselves for diverse professional positions.

You can read more about how the "Evolution, Neuroscience, Biotechnologies" major is implemented in SAS here.

7. How did you come to the field of Life Sciences?

Choosing a specific profession is one of the most important issues of human life. Yet you usually must decide on it at a young age while you do not know what you really need and want. For me, I was sure of one thing: I wanted to be free. I knew that I would not be fond of being a white-collar employee, working in a routine of 9 am to 5 pm in an office for about 20-25 years and then getting retired and doing yoga. At the same time, when I was a student, I was always attracted to literature, but I was quite competent in maths and science. In my time, there was this tendency that successful students were supposed to choose maths and science. It was more prestigious somehow. So, I decided to study something related to science and this clicked with the life sciences, booming at an incredible pace since the late 20th century. 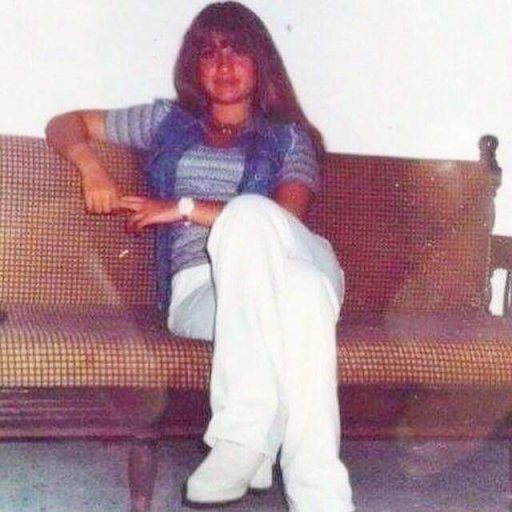 Figure 2. Ayla at 19 years old, decided to go into science.

The same year the Human Genome Project was completed, I was about to defend my master's thesis in Biotechnology at the Middle East Technical University and thinking about my future. I would either go to the industry or pursue my doctorate and if I decide on doing the latter, I would do it in the best place, preferentially in Europe. This was how I eventually found myself, holding a prestigious scholarship from German Research Foundation (DFG) and travelling from Ankara, the capital of Turkey to an incredibly beautiful town in Germany, Heidelberg to pursue my doctorate in the field of molecular biology (and neuroscience). With its romantic landscape including the "Philosophenweg", the old bridge, the castle, and the dazzling baroque "alt stadt", Heidelberg was not only famous for its beauty; it was a university town and indeed the home of Germany's oldest and Europe's one of the most reputable universities. Charmed by the hypnotic beauty of the city, I felt like a fool when in 2002, it became clear that my new life was not easy: long hours spent in the lab with a white lab coat, with three timers ticking in three different pockets for three different experiments running in parallel. And who knows if any of the experiments would work or not? Most of the time experiments did not work and I had to find out why. Sometimes experiments did not work until I got obsessed about it for several weeks. But somehow, I had this idea that the state of freedom will come through these experiments from the dedicated hard work for many years. And I continued. At some point, it has started to feel like the runner's high, as there has been a progressive feeling of euphoria. At that moment I understood that I was right. 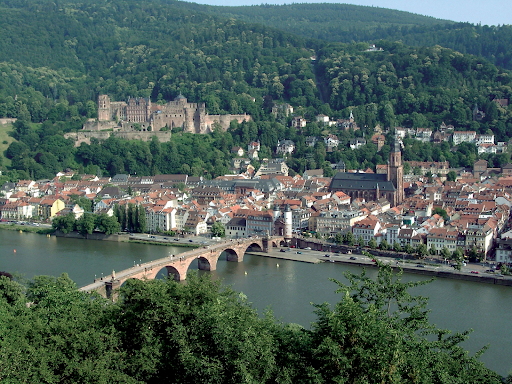 8. What attracted you to come to the Life Sciences in SAS?

The idea of an academic start-up in Russia, the spirit, the interdisciplinarity, the experimentation, the exploration, and the challenge of teaching science in multiple educational frameworks and teaching neurobiology for some excellent students. 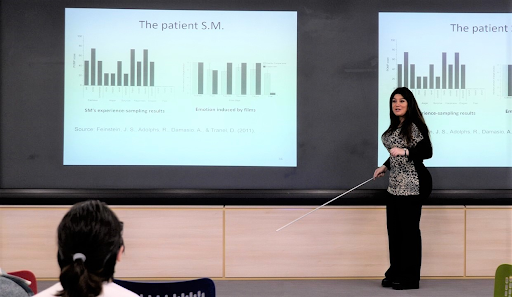 Figure 4. Ayla has been teaching in Tyumen for over a year.

9. How many languages do you speak?

English, Turkish and some German.

10. If you hadn't become a biologist, who would you be?

Artist, novelist, or a singer or a dancer may be. But especially the last two professions would not be accepted by the family.

11. Do you have life hacks for better learning, secret mnemonic techniques?

The only secret is not a secret, it is "hard work".

12. What did you talk about at the last consultation with the student?

It was about a student's essay on video games.