In this page I am writing a list of python exercises.

Exercise: load all files from a directory – part one

In this exercise we start creating a directory that contain some files. You can use an existing directory, with some existing files, or create a new directory and put some files in it.
Then, create a new python script and:
1) import the library called “glob”;
2) define a variable containing the path to a directory in your computer
(hint: the variable is a string, but is a special type of string, is
a “raw string”, so you need to write a “r” just before it);
3) add “\*” at the end of the directory, to mean “all the files contained
in the directory”;
4) use the command glob.iglob() in a for loop, to print all the paths of
all the files contained in the directory;

optional additional part:
import os library, and use os.path.splitext() and os.path.basename()
to list just the names of each file, and not the full path.

Exercise: load all files from a directory – part two

In this second part we use the python code created in the first part, and modify it.
Also, now we want to use the files in the directory. SO, instead of using just “any file”, we want to create some files, with some specific content. Therefore we start creating the files.

1) Create several different text files (around 3 or 4) in a directory (NB: text files are created with text editors. In this case we want to give them the extension “.txt”)

2) In each file write a list of several numerical values (around 10 or 15); write one value per line, going to a new line for each value.

3) Using the part one of this exercise, and the command open(file_path, “r”), for each step of the “for” loop, open the files in the directory, read the content with the command file.read(), close the file, and write all the numerical values in a list, one list for each file.

4) at each step we need to create a different name for the data, and store it in a different place. One solution is to use the command “n, filepath = enumerate()” in the for loop (enumerate the list of paths generated by glob.iglob). Then, we can create a different label at each step of the for loop, using the “format()” command (something similar to “label_{0}”.format(n) ).
In this way we can store the data in a dictionary, and use the label as the “key” of the new element of the dictionary.
(note: create an empty dictionary before the “for” loop; then add a new element to the dictionary, at each step, with the syntax dictionary[key] = data_from_the_file )

Exercise: load data from all the text files contained in a directory and plot the data

Similarly to what done in the previous exercise, let’s use the same idea of a cycle over all the files contained in a directory, and let’s create 2D plots of the data, one plot for each file.
We can use the command for path in glob.iglob(r”C:\path\to\the\directory\*.txt”): to create a cycle over all the text files contained in the directory, and at each step of the cycle we open the file, we read data from it, we create a plot, and then we save it.

When you read the data, put the data in a variable, and then use that variable for the plt.plot() command.
Depending on how you write the data in the files, you can use the command string.split(“\n”) or string.split(“, “) (where “string” is the data you read from the file) depending on how you separate the values in the file, with a newline or a comma and a space. Remember to convert from string to int or to floating point, before using in plt.plot().

We have seen a good way to do that:

Also, the command string.strip(“”) can remove a character from the end or the beginning of a string. The default is tring.strip() which removes all the white space.

Hints:
open the first file, load all the content in a string variable, close the file.
open the second file, and do the same.
It is useful to use the commands string.split(). If you don’t remember the use of those commands, search on the book (Lutz) or on the internet, or, do some test in the console (use a string with several words separated by a space).

at each step of the internal file use “email1 == email2” to compare the emails;

use output_file_id.write(email + “\n”) to write the right emails in the output file.

An anagram is a type of word play, the result of rearranging the letters of a word or phrase to produce a new word or phrase, using all the original letters exactly once; e.g., orchestra = carthorse. The new word has to be a word existing in the language (english, in our case).
Given a word, find all the anagrams.

hints:
• use the command input(“please insert a word: “) to insert a word. To avoid problems, use a short word, max 6 letters;
• use the library “itertools”, and use the command itertools.permutations() to find all the permutations of the letter in the initial word (permutation = a re-ordering of the same elements);
• use the dictionary at http://www.puzzlers.org/pub/wordlists/unixdict.txt to check if a random combination of letters is an english word or not. To use the dictionary:
– open the link above, select all the text, copy it and paste it in a text file. Save the text file and use it in your python script.
– from python, open the file, read it and put the content into a variable (called e.g. “all_words_string”).
– transform this big string into a list of all the words using words_list = all_words_string.split(“\n”)

7) using the file of the previous task, open it in python, read the content and create a variable that contains the list of all the numbers (use the command split(“\n”) ). Then use matplotlib to create a 2D plot with all the numbers represented as stars, using plt.plot(list, “*”) (see figure). 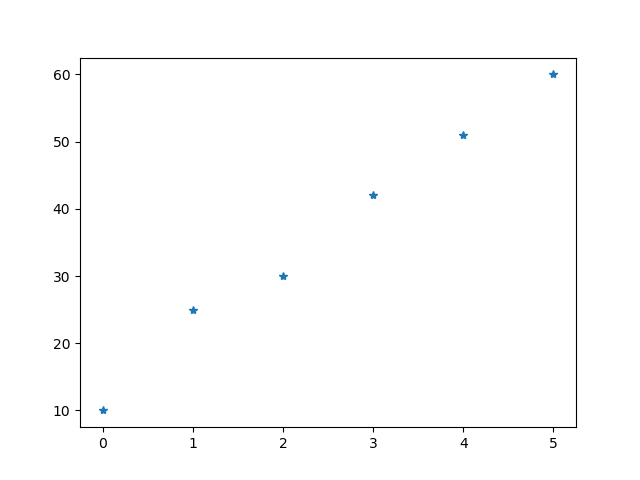 9) Create a variable containing a list, the list has 10 elements, each element is a string of one word. From python create a text file. Then use a for loop and write all the words in the file, one on each different line.
10) With the command “range(0, 20, 2)” generate ten even numbers, and write them in a new text file, one for each line.
11) Use the input() command and ask for three words. Then use the “+” operator to join them, and print the result.