Ivana studied biology in Serbia, where she obtained her PhD in 2000. She held positions at the University of Montenegro for 5 years working mostly in the laboratory for Human Genetics, and specializing in prenatal diagnostics. At the same time she developed interest in the animal systematics and evolution and has chosen one of the oldest crustacean groups (class Ostracoda) as the model organism of her research interests. Since obtaining her PhD and until 2009, Ivana worked for 7 years in the Western Australian Museum in Perth, and two years at the University of Tasmania. As recognition of her research Ivana was awarded with the Alexander von Humboldt fellowship for senior researches, and has spent almost 2 years at the University of Hamburg (Zoological Museum). From 2011 she has been working at Hanyang University (Seoul), coupling undergraduate and graduate teaching and research. Ivana is a well-known ostracodologist with 76 per-reviewed publications (of which two are books), and has contributed to biodiversity awareness immensely by describing close to 300 new taxa. Her current research projects focus on the evolutionary adaptations to extreme environments. She is an active contributor and editor of the World Register of Marine Species (WoRMS). Ivana’s hobbies include running (marathons included), cycling and sailing. 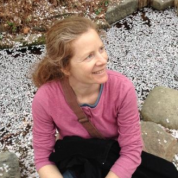 Ivana’s areas of expertise are animal diversity, phylogeny, and evolution. Her model group, a crustacean class Ostracoda has a rich and extensive fossil record, and has a diverse recent fauna that live in all types of aquatic environment. Today, Ivana is the only specialist working on all ostracod groups and covering all water ecosystems of the world. One of her publications, Freshwater Ostracods of the World (book) is the stepping stone for ostracodlogists and ecologists working on freshwater ecosystems. Despite concentrating on one animal group, Ivana’s research is multidisciplinary. She combines comparative morphology, quantitative morphology and cladistics. The latter is either based on morphology alone (morphological cladistics) or more often both morphology and DNA. She is interested in phenomena of cryptic species and the level of molecular diversity in species complexes. Current research projects include evolution of aquatic organisms in extreme environments, where she is particularly interested in deep sea (deep sea 2, etc.) and subterranean waters with the special reference to marine interstitial. In addition, Ivana has recently started exploring ostracod biodiversity and their evolution in the Lake Baikal, and she intensively uses fossil ostracods for dating of molecular trees (Baikal 1, Baikal 2). Ivana has also participated in creating several Web based databases such as the Faunal Directory of Australia, Encyclopaedia of Life (EOL), and Wold Register of Marine Species (WoRMS).