Brian Smith received his PhD in Political Science from Boston University. He also earned an MS in Ethics and Public Policy from Suffolk University. Broadly he works in political theory/philosophy. Additional information is available here. 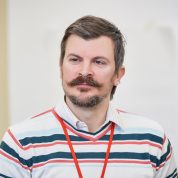 Project 1: Brian is broadly interested in alternative models of citizenship found within anarchist communities, New Social Movements (NSMs), and the new left. Many of these groups privilege the concept of active citizenship over rights-based or ascriptive, state-centered notions of citizenship. However, much of the theoretical work among (for example) critical citizenship scholars understands active citizenship exclusively in terms of reaction, protest, and resistance. Active citizenship is about the fight to be recognized and to extend rights protections to a broader set of marginalized, silenced, or excluded members. While in a certain sense laudable, this definition is problematic and ultimately counterproductive. One of the arguments developed in this project is that the relatively weak staying power of (for example) NSMs stems from a lack of theoretical clarity about what meaningful political action entails. The idea is that rather than locating active citizenship in the performative or ritualistic aspects of dramatizing grievances – something that is ultimately reformist or transitional in nature – NSMs should focus on internalizing procedures of communication and deliberation from within. This, of course, is not to suggest that protest and activism are irrelevant or unnecessary. The point is that, as it currently stands, it remains unclear how protest can lead to long-term political programs.

Recent publication on citizenship and anarchism:

Project 2: Brian is also currently working on a book-length manuscript titled Scattered Multitudes: John Locke on Territory and Transmigration (proposal under review). This project treats Locke as an early theorist of migration and the movement of peoples more broadly. In particular, this project explores Locke’s relationship to the Whig ideology of ‘populationism.’ It was widely argued by a number of theorists and economists throughout the 17 century – incidentally, many of whose books were included in Locke’s library – that a country’s strength is determined by the number of people who live there. While arguments in favor of large populations partake of some of the proto-mercantilist rationalizations that were just beginning to be formulated around this time, they served a much more essential function. More precisely, population growth was routinely characterized as a key empirical metric of political health, in the broadest sense. That foreigners desired to relocate and settle in a country signaled not only its economic strength but that is has a strong political constitution. Only a country with robust laws of liberty and economic opportunity would attract new members. In this tradition, conceptions of the public good regularly assumed that a wise sovereign would aim at population growth (i.e. getting natural born residents not to emigrate and encouraging foreign-born skilled laborers to immigration) – a surprising conclusion considering the fact that many commentators on Locke find in his writing a strong defense for the exclusion of foreigners. Getting this history right sheds new light on Locke’s thought and his relationship to the movement of peoples in the 17th century.