Artemy Magun is a professor of Democratic Theory, Department of Sociology and Philosophy, The European University at Saint-Petersburg. He is a political theorist and the author of «Negative Revolution» (2013) and many articles in the leading journals in political theory and philosophy.

PhD degrees from the University of Michigan and the University of Strasbourg. Based on his dissertations at these institutions, Dr. Magun wrote his book Negative Revolution: On Deconstruction of the Political Subject, which was published both in Russian and French and in English in 2013. 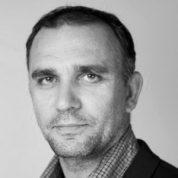