Arnab Roy Chowdhury is a Postdoctoral Fellow at the Public Policy Department of the National Research University Higher School of Economics (NRU-HSE), Moscow. Before this as a Postdoctoral Fellow at Move Media Communications (MMC) in Bangladesh, he worked on the issue of forced migration of the Rohingyas from Myanmar and the resultant refugee crisis in South and Southeast Asia. He taught sociology to graduate business students, as a Visiting Assistant Professor at the Indian Institute of Management Calcutta, India (Public Policy and Management Group).
Arnab received his PhD in sociology from the National University of Singapore, and his MA and MPhil degrees in sociology from Sambalpur University, India. His undergraduate BSc degree was completed in India with zoology (major) and botany and chemistry (minors).
Arnab is a trained painter. He has published poetry, and has an interest in collecting colonial India artefacts.

Arnab’s doctoral research focused on the social movements of subaltern agricultural and indigenous communities against large hydropower projects in two adjacent regions of India. He argues that these movements brought about a transformation in resettlement and rehabilitation laws, made civil society stronger, and brought about democratisation of the local state – thus, causally and constitutively, contributing in the process of state formation from below.
His thesis maps the politics of the subalterns in interaction with the state, and demonstrates that its various strands, such as cosmopolitanism and localism, emerged in postcolonial India and expressed themselves on the local, national, and transnational scale. He has especially engaged with the theory of hegemony by Antonio Gramsci, its elaboration in the colonial and postcolonial Indian context by Ranajit Guha and the Subaltern Studies group, and its relation with the post-Marxist theory of Ernesto Laclau and Chantal Mouffe.
Arnab’s postdoctoral work is a thematic and conceptual extension of his doctoral thesis. He is interested in knowing in intricate fashion how national and transnational extractive capitalism functions, through legal and informal processes, in large-scale and in artisanal and small-scale mining. He is interested, particularly, in the mining of high-value minerals such as diamonds, which have different ‘materialities’ and give rise to different patterns of labour engagements in, and social-formations around, mining realms. These mines connect with the market via global value chains, in an instance of actually operating supply chain capitalism – as explained by Anna Tsing.
Arnab is also interested in the processes through which these precious stones acquire a special kind of commodity value and ‘social life’, and which can be seen through Arjun Appadurai’s notion of commodity pathway diversion and Luc Boltanski’s and Arnaud Esquerre’s notion of enrichment economy.
One of his other interests is studying the forced migration, refugee-hood, and statelessness of the Rohingyas, which he studies using Giorgio Agamben’s concepts of homo sacer and state of exception.
Currently, Arnab is developing a project on anti-nuclear movements in the nuclearised landscapes affected by radioactivity in India, India’s participation in global uranium mining and trade as a postcolonial nation, and the technopolitics that emerges in the process. 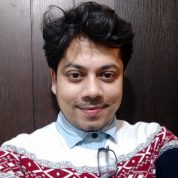