Andrew Wachtel is the president of the American University of Central Asia in Bishkek, Kyrgyzstan. Previously he was dean of The Graduate School and director of the Roberta Buffett Center for International and Comparative Studies at Northwestern University. A fellow of the American Academy of Arts and Sciences and a member of the Council on Foreign Relations, his interests range from Russian literature and culture to East European and Balkan culture, history and politics to contemporary Central Asia. His most recent published books are The Balkans in World History (Oxford UP, 2008) Russian Literature (with Ilya Vinitsky, Polity Press, 2008), and Remaining Relevant After Communism: The Role of the Writer in Eastern Europe(U. of Chicago Press, 2006). He is also active as a translator from Russian, Bosnian/Croatian/Serbian and Slovene and his book of translations of the Russian poet Anzhelina Polonskaya, Paul Klee’s Boat (Zephyr Press, 2014) was short-listed for the 2014 PEN Poetry Translation Prize. 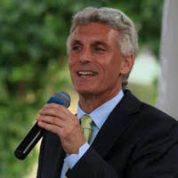